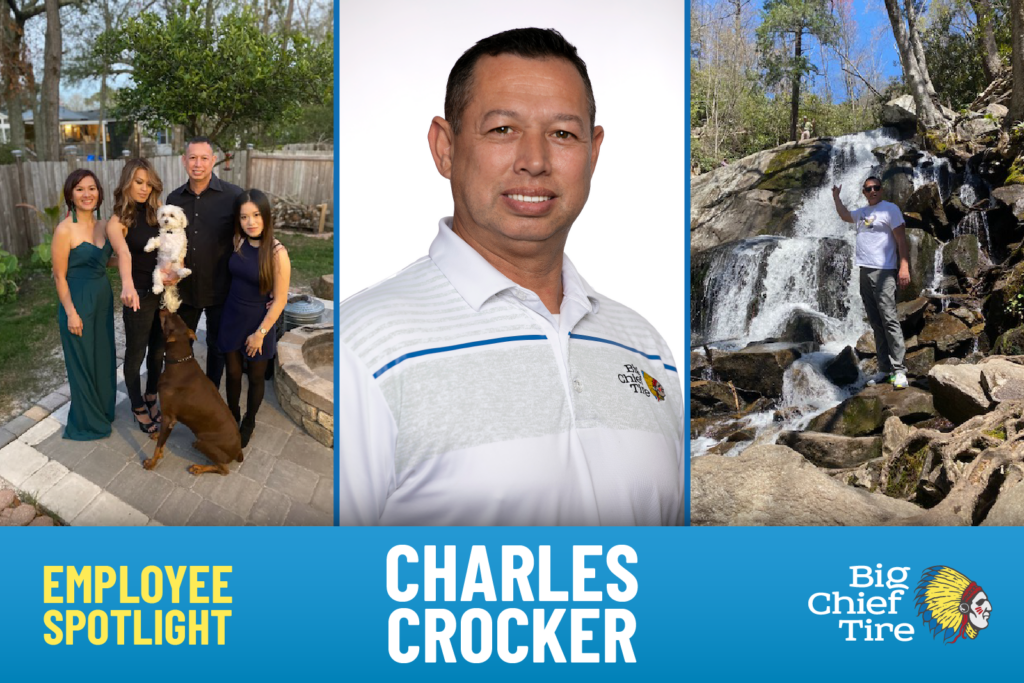 Big Chief Tire is proud to have a long list of talented employees who have been with the business for many years. One of our most dedicated team members is Charles Crocker, the manager of our Southside location. Charles took over the store in January of 2020, right before the pandemic. His efforts have contributed largely to the success of our business over the past year. We recently sat down with Charles to learn more about his background and why he loves working for Big Chief Tire.

Charles grew up in Oklahoma where he first started repairing engines at age 8. He spent his free time building hot rods and learning about cars every chance he got. After college, he continued working on cars at tire shops across town until his family in Jacksonville, FL convinced him to make the move.

When he arrived in Jacksonville, he started working at another local tire shop where he eventually became the Manager. However, the business was bought out by another company. That’s when the owners at Big Chief Tire reached out to him to join their team.

A Man of Many Hats

As the store manager, Charles was tasked with updating the appearance of the Phillips Highway location for customers, as well as increasing sales. And he’s been nothing short of amazing. Internally, he makes sure employees are taken care of and executes everyday operations. Externally, he talks with customers and ensures their satisfaction with the team’s service.

A Team That Has Your Back

Whenever Charles needs something, or even when he doesn’t, his team is always there. That’s what he loves most about the job— he knows his colleagues have his back. He says, “To me, it’s not work, it’s coming in and enjoying every second of it.” He appreciates Big Chief’s core values that revolve around being family-owned and operated for since 1961. “There are no pushy salesmen here, and we always try to treat our customers like they are family,” he says. He’s able to genuinely take care of their customers with free reign and support from all his colleagues.

Growing up in Oklahoma, Charles wasn’t used to the convenience that Jacksonville offers. “It would take at least two hours to get to any major city,” he mentioned. So naturally, he was blown away by everything Jacksonville has to offer. In his free time, Charles and his wife love exploring the area with their two dogs. “We have one doberman pinscher and a white maltese and she’s the boss,” he said.

When they’re not strolling the streets of historic St. Augustine, you’ll find them under the trees or by a river. “We love getting out in nature and are constantly moving at all times,” he said. They enjoy everything from hiking, kayaking, bicycling, and experiencing the natural beauty of our local springs, his favorite being Blue Springs.

When asked what his dream car is Charles responded, “I’m driving it right now. It’s a Dodge Challenger in Sublime green.” But if he had to choose a new favorite, it would be the brand new Corvette. He laughs and mentions, “I would drive that around like I stole it.”

5 Things Your Car Wishes It Could Tell You