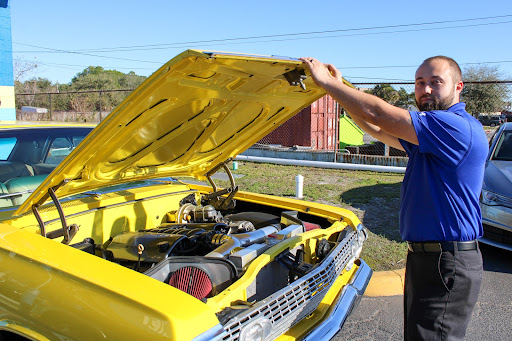 Big Chief Tire prides itself on giving quality and reliable service to the Jacksonville area for over 60 years. We couldn’t do it without our brilliant employees. Josh Kovacs, the store manager of our Southside shop team, sets an example of what it means to be a dedicated, hard worker. Recently, we were able to sit down with Josh and get to know more about him and his story.

Hailing from the small midwest town of Columbia Station, Ohio, Josh moved to The Sunshine State after completing his master’s in Sports Administration at Cleveland State University. His future wife was living in Jacksonville and had a scholarship at UNF. The two have been married for three years and now call Duval home.

Josh initially worked as a technician and service advisor for a national dealership. Unsatisfied with working for a corporate company and feeling like “just another worker,” he was drawn to the tight-knit environment of Big Chief Tire. Since 2019, he’s been a member of our family.

Josh was hired on as a service advisor. With his efforts and perseverance, he was promoted to Assistant Manager of our Blanding Boulevard store within his first year. His skills have paid off—and he assumed his current role as the store manager of our Southside location in 2021. One of Josh’s greatest strengths is that he aims to treat everyone who comes into Big Chief Tire with value. His employees work together to strive for success in business and life. “My team at Phillips Highway enjoy working together,” he says. “We spend more time together than apart sometimes, and I truly believe having that family-type bond allows us to take care of our customers like family as well.”

Growing up in the frigid, overcast winters of northern Ohio, Josh appreciates the year-round tropical escape Florida offers. Before moving to Jacksonville, he recalls having limited time to enjoy clear skies and sunshine in his hometown. “We had a week in Ohio where the temperature reached -30s with the windchill factor. We took hot water, filled up a pitcher with it, walked outside, and threw the water into the air—not a single drop touched the ground. It froze and turned to dust in midair. That’s too cold!”

What Josh Does in His Free Time

For the past few years, Josh hasn’t had much free time. When he could, he would take up his passions for fishing, boating, and driving his 1963 Chevrolet Impala to car shows. Recently, he built a dream of his, quite literally—a log cabin home. He extends his gratitude to his family and friends, who assisted with planning and building the cabin. After three years, Josh is proud to announce that the City of Jacksonville gave him an Occupancy Certificate after passing all inspections. “We officially moved in 4 weeks ago!”

Josh’s Dream Car and Why

Josh is known for his affinity for classics. His dream vehicle is a classic muscle car of the ‘70s. “My dream car would be a 1970 Plymouth Road Runner Superbird. That body style of the car with the large wing in the rear was unlike any other muscle car of the 60s or 70s in terms of style. I enjoy vehicles that push the limits of performance, style, and technology.”

Valuable team members like Josh are what keep Big Chief Tire rolling.  When you make an appointment at our Southside location, be sure to say hi to Josh.

Selecting the Right Tire Size for Your Car

The Importance of Regular Tire Rotations